Unicellular algae such as chlorella have existed for more than 2.5 billion years. Neither climate change nor natural disasters have been able to eradicate them. Chlorella is a “survival champion” and is among the first life forms to have appeared on earth. But it wasn’t until 1890, however, that it was identified by the biologist M. W. Beijerinck and introduced into western science.

In botany, the genus chlorella is referred to as a species of microscopic freshwater unicellular green algae of the chlorellaceae family. She belongs to the Trebouxiophyceae class.

The scientific world distinguishes more than 100 genetically different chlorella species. In order to distinguish species from each other, different characteristics such as the ultrastructure and chemical composition of the cell wall, the ultrastructure of pyrenoids, the physiology, morphology, molecular biology, etc. are studied. However, there is still a lot of uncertainty about the classification of the different species.

Genus classification is quite chaotic. No complete processing, in which all variables are reduced to reproducible conditions, has been attempted and therefore few chlorella species can be identified on the basis of the original descriptions.


A concept of genus and species of Chlorellaceae remains provisional, as in most cases there is still a lack of classical and molecular approaches to identify clear phylogenetic lineages. 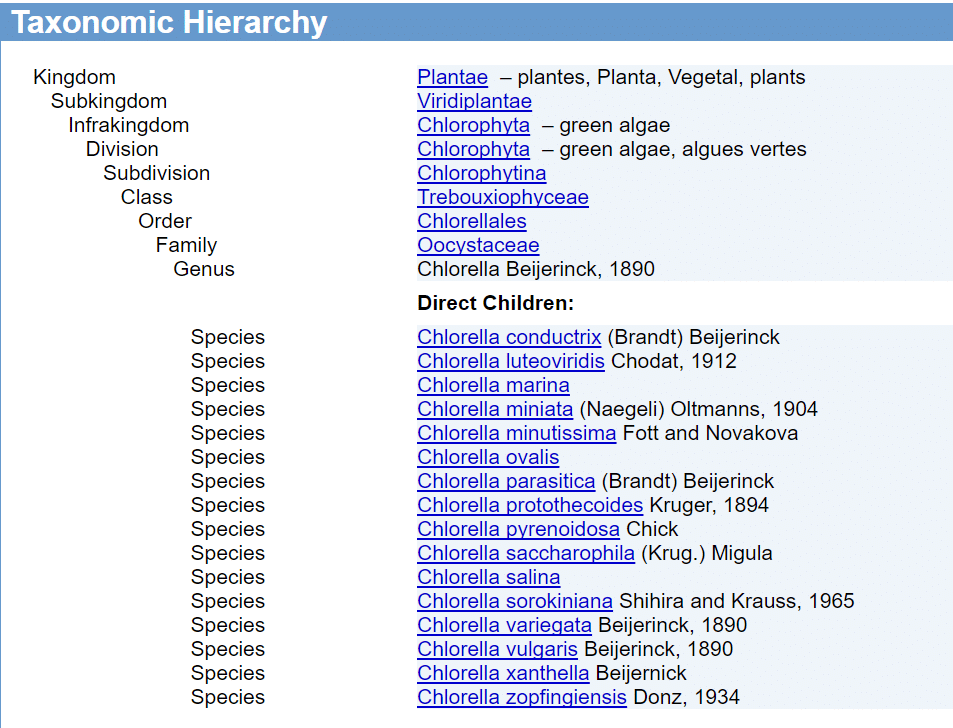 With current screening and analysis methods, the different orders, families and genera of chlorella are determined with greater precision.

Since the first description of the genus type Chlorella vulgaris by Beijerinck in 1890, more than 100 species of Chlorella have been described (Krienitz et al., 2004).
Traditionally, these species were linked to the genus Chlorella according to morphological criteria (Pröschold & Leliaert, 2007).
As early as the 1970s, it was recognised that Chlorella was in fact a polyphenyletic group: there is no common ancestor exclusive to all species. With the advent of molecular analysis techniques, the previously established classification of these species has been drastically disrupted. Today, systematists use “integrated” approaches that take into account the different elements which are molecular markers, morphology, ultrastructure and physiology.
Currently, the results show that Chlorella are divided into two classes within the phylum of chlorophytes: Trebouxiophyceae and Chlorophyceae.
Within the Trebouxiophyceae, there are different clades including Chlorella-clade and Parachlorella-clade. The phylogenetic difference between these 2 clades has been confirmed by structural studies: wall and autosporulation mode (Yamamoto et al. 2005).


We propose that only four species are kept in the genus Chlorella (Chlorophyta, Trebouxiophyceae): C. vulgaris Beijerinck, C. lobophora Andreyeva, C. sorokiniana Shih. and Krauss, and C. kessleri Fott and Nováková. The common characteristics of those taxa are glucosamine as the dominant component of the cell wall and the presence of a double thylakoid that breaks the pyrenoid matrix in two. (Journal of Phycology – 1999)

Numerous scientific analyses have shown that not all chlorellas are as valuable and that the way they are grown and processed can make a huge difference in their impact on health. However, depending on the case, producers cultivate strains of chlorella vulgaris or chlorella pyrenoidosa (or sorokiniana). And each one uses specific cultivation methods and treatments that have an impact on the quality of the produced chlorella.

Numerous studies have studied chlorella pyrenoidosa and found that it differed from chlorella vulgaris.

Chick (1903) first described Chlorella pyrenoidosa and distinguished it from Chlorella vulgaris on the basis of the obvious presence of a pyrenoid in chloroplast.

Many health specialists, such as the late Pr. Bernard Jensen and Dr. Mark Drucker consider chlorella growth factor (CGF) to be chlorella’s most remarkable element. Indeed, it provides powerful support for tissue renewal and immune defence. 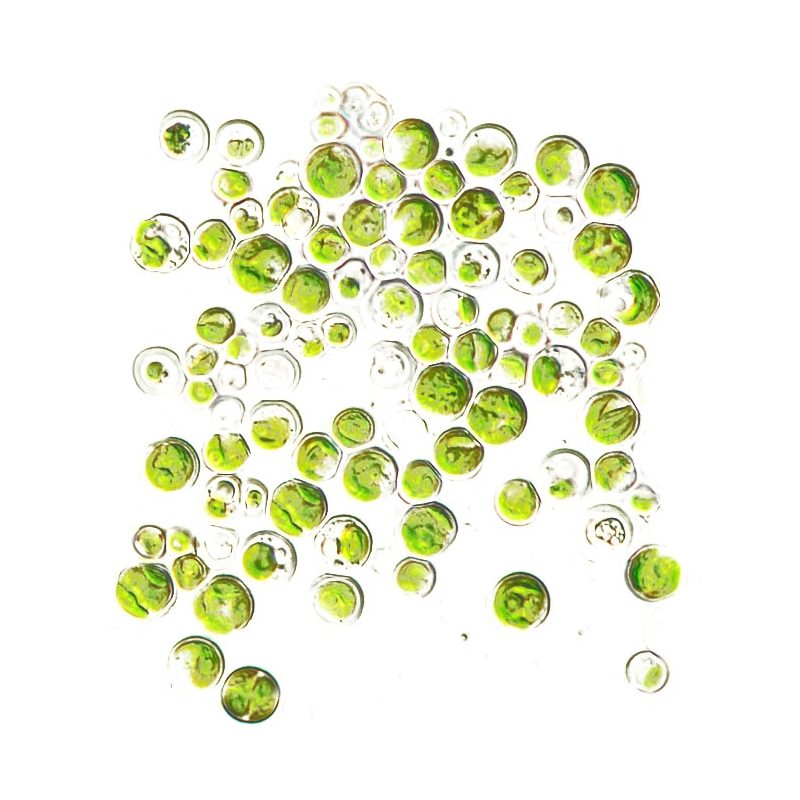 Some claim that chlorella pyrenoidosa does not exist. This is in fact the consequence of inconsistencies and errors detected in some older scientific studies.

The strains that have historically been assigned to the Chlorella pyrenoidosa species are likely to be misidentified. Most of the strains formerly known by this term have been renamed Chlorella vulgaris, Chlorella sorokiniana or Chlorella fusca, the latter having been transferred to the genus Scenedesmus (Huss et al., 1999; Ullmann, 2006; Roshon, pers. comm.). However, the reclassification work is not complete.

It is now recognised in the scientific world that many chlorella pyrenoidosa cultures studied in the past actually refer to what is now called chlorella sorokiniana.

At the major chlorella producers level, analyses and certifications have made it possible to determine precisely which strains are cultivated and, where applicable, the designations pyrenoïdosa are gradually replaced by sorokiniana. This is the case for chlorella selected by Nutriphys®.

The chlorella sorokiniana species is named after its isolator, Dr. Constantine Sorokin, who published detailed information on this chlorella species (such as Chlorellu pyrenoidosu Chick, strain 7-1 1-05) isolated from a sample collected on 10 June 1951 from the campus of the University of Texas at Austin. It appears to be closely related, due to its rapid growth rate, to the vigorously growing chlorella regularis. But its ability to grow very quickly at high temperatures justifies its ranking as a species.

We use cookies to enhance your experience. By continuing to visit this site, you agree to our use of cookies. More info. YesNoMore info